Art by @ritwells
Back to Writings

The Perversion of Aversion 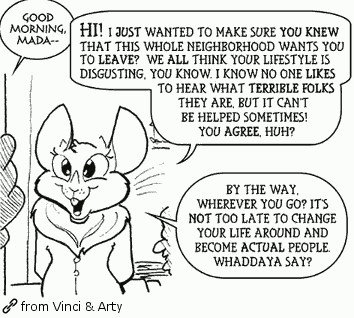 As in many other emotionally-charged topics, the word means different things to different people, and when used as a bludgeon serves to do little more than hurt and shut down discussion. This is hardly helped by the inflammatory climate that it is often thrown into. However, the idea of homophobia is a real one, and it carries often-underappreciated nuances that can go multiple ways depending on the speaker, the recipient, and the context:

You can argue that they’re all the flip sides of some kind of geometrically impossible three-sided coin, and there’s probably some mutual causation going on. But I think that the last case—mere _aversion_— is the most insidious exactly because it’s the least overt form of homophobia.

Fear is what often comes to mind first when “homophobe” is uttered. It’s a valued political resource, and make no mistake it is an extremely powerful and widespread one. But one is very rarely afraid of a specific person; just what they represent. You can be afraid of what alcohol represents: loss of law, loss of intellect, whatever. But who’s afraid of the average partaker? In the same way, I find it difficult to believe most people can ever really be afraid of a gay person; just what they represent when interpreted as a political bloc. This isn’t to say that some people aren’t afraid; just that it isn’t the norm. And fear: fear is easily remedied through mere exposure.

Hatred is a tougher nut to crack, and is definitely more dangerous partially because it is one short step from violence, partially because it is usually a symptom of some other problem (fear leads to anger, anger leads to hate; if the chain of cause and effect is short, the above paragraph can apply), and partially because it is by nature extremely resistant to exposure. A hater does not just try to avoid being exposed to the hatee; they will actively work to destroy the target of their ire to prevent contact. Luckily, outright hatred is relatively easy to spot, and eventually dissipates in the same ways as fear.

Which leads us to Aversion.

Aversion is not a specific thing; it’s just the absence of personal connection that should otherwise exist. It cuts people off from their support network and leaves them to face their problems completely alone. It dehumanizes. It desiccates the heart. Maybe it’s just discomfort, maybe it’s pseudo-intellectual; but make no mistake, it effects nothing but harm even if the averter is unaware of their actions—or lack thereof. And there’s no general formula, no formal algorithm for detecting it. Statistical methods and personal introspection are the only tools we have.

Part of the trouble is, people often get hung up on the concept of “homophobia” being restricted to a fear reaction. But that’s not a good notion to hold; there are more facets to the “-phobia” suffix than that.

Lipophobicity is an extremely useful trait of some compounds: it’s what makes fingerprint-resistant phone screens work, after all. A lipophobic compound is simply one that has an aversion to fats and oils; it forces them away from a screen. It does not “fear” fats and oils, nor does it does “hate” them; it simply avoids them. In chemical terms, this is all that the -phobic suffix means.

Homophobia doesn’t need to be a fear reaction, nor does it need to be as overtly hateful as what the mouse displays in the comic above.

The only form it needs to take to do irreversible harm to a person is simple aversion.